Student Employee of the Year 2021 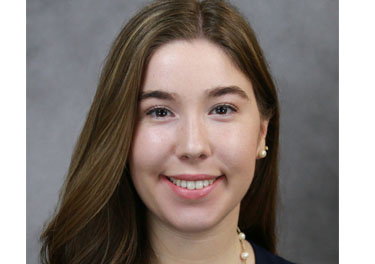 “Over the past 18 months, Kelly has become a vital and valued staff member in the Office of the Dean of Students, and she is more than deserving of this honor. Not only has she has excelled at the two principal duties of her position – video production and web maintenance – but she has done so with creativity and passion for her work.” - Don Reagin, Office of the Dean of Students

Kelly joined the staff of the ODOS in August 2019, just as our two-person marketing and communications team was undergoing significant personnel changes. Our full-time web developer was departing in just over a month, leaving me responsible for web maintenance in addition to significant other duties. The webmaster spent her final days on campus giving Kelly intensive instruction in web design and maintenance, a field in which she had a limited skill set at the time. Through these sessions and hours spent watching Internet tutorials, Kelly became so proficient that I was able to assign her even the most challenging job requests without hesitation. She stepped into her new role with humor, grace and, above all, keen proficiency.

As she and I both became more comfortable with sharing the web development workload, she turned her focus to her video production responsibilities. To reach out to new students, we encourage established students to share their stories and to speak about what makes their UGA experiences unique. For the past year, Kelly has been coordinating this effort by creating video profiles of some of our outstanding student staff members and students who participate in our “Gettin’ Down with the Dean” program. Kelly’s excellent interviewing and video production skills have given these profiles an authenticity and warmth that is often missing in these types of productions. She has a knack for setting her interview subjects at ease and bringing out their genuine personalities. One of her crowning achievements in her relatively brief tenure in our office was the creation of a video profile of the Whitehead family, fourth-generation Dawgs who had five siblings on campus concurrently during the 2019-2020 academic year. This eight-minute feature was entirely scripted, filmed, and edited by Kelly with assistance from the family, one of whom was also a journalism major. Kelly effectively led this six-person team of her peers as they scheduled interviews, collected still photos, and logged hours of production time. Shared on social media by both the University and the family, the film received widespread praise and hundreds of views.

Kelly’s role became far more critical during this past year of tremendous challenge as we navigated the uncertainties of the pandemic. While quarantining at her home in New Jersey, Kelly took a leadership role during spring semester in helping us to prepare for the presence of our Dean of Students, Bill McDonald, at “virtual orientation.” Dean McDonald typically speaks with all incoming students during summer orientation sessions, and we sought to recreate that presence in an online forum. Working with New Student Orientation, she strategized a solution, worked quickly and efficiently to produce a 30-minute video production of the dean’s presentation, complete with student testimonials. She also provided valuable assistance in launching a Dean of Students orientation web site with additional video testimonials and information for new students, as well as continuing to assist with crucial updates to five websites housed under the Dean of Students.

As campus came back to life for fall semester, Kelly returned invigorated and ready to take the next steps to help students feel comfortable in their new reality. She immediately began her interviews and video profiles and took the initiative to assist us with three “Dogs for Dawgs” socially distanced new student dinners, all held outdoors at Lake Herrick Pavilion. Kelly attended the dinners as photographer and videographer, but she also served as an ambassador for our office. Friendly and outgoing, she engaged with new students in a manner that far exceeded our expectations for her presence. We were all delighted. Kelly has consistently impressed her coworkers and students with her kind and thoughtful demeanor. She is genuinely interested in others, and I have appreciated the manner in which she truly desires to learn about others as individuals, not simply as students or UGA professionals. Her appreciation of people, her sense of inclusivity, and her dedication to excellence will continue to serve her well.

I once teased Kelly that she could be the “spokes-student” for NACE core competencies. Her extensive and expert work for our department has shown that her time in Grady College has well prepared her for a productive career in media; however, her infectious energy, enthusiasm, initiative, and joyful spirit are what make her truly unique among the student staff with whom I’ve worked over the past 29 years.

In closing, please allow me to reiterate that Kelly has been an exemplary staff member. She has contributed greatly to the face of the ODOS, and without her we would not have been able to reach out and engage students as effectively during the pandemic. She is the embodiment of excellence among student employees.

Nominated by: Don Reagin, Office of the Dean of Students

Return to the Student Employee of the Year Awards Homepage